Munnar is a town located in the Idduki district of India’s Kerala state, situated in the south Western Ghats of India, the name Munnar usually refers to the whole tourist area of the Idukki District of which the town forms only a small part. The name Munnar is believed to be derived from the Malayalam/Tamil words Munu (three) and aaru (river), referring to the town’s strategic location at the confluence of the Muthirappuzha, Nallathanni and Kundaly rivers. The Munnar panchayat in the Devikulam block is the largest panchayat in the Idduki district having an area measuring nearly 557 km². Essentially a pass ; the area around Munnar is surrounded by vast jungles and remains wet and cold during most of the year. The entire area of Munnar officially belongs to the government of Kerala; though the Poonjar royal family (its pre-independence owners) have made claims to the contrary. Sprawling tea plantations, picture book towns, winding lanes, trekking and holiday facilities make Munnar a unique experience for the tourist and traveller. Munnar is essentially a tea town. There is a large population of people from Tamil Nadu.

Until the early 1990s, Munnar, despite its enchanting natural beauty and salubrious climate, continued to remain a sleepy plantation town. Its tourism potential was realised only by the Sterling Group and Mahindra Holidays. However, the promotion of Kerala globally as God’s Own Country and the rapidly increasing spending capacity of middle class Indians has resulted in a virtual explosion of tourism activities in Munnar. Resorts, big and small,have started springing up all around the town and overnight the once sleepy town has became a bustling tourist destination. Many of the developments done by unscrupulous investors have had a significant detrimental impact on the environment in Munnar and the once romantic beauty of the “sleepy town of Munnar” has significantly eroded over the years. Moreover the huge throng of domestic and foreign tourists in their buses and cars have added to pollution in Munnar and stretched the town’s infrastructure and service delivery systems to their limits.

Earlier most of the land around Munnar was leased out to planters and the only activity permitted on such leased land was plantation of cardamom. Ownership continued to remain with the Government and even cutting of trees on such leased land was prohibited. However, the recent development of resorts has resulted in large scale deforestation and violation of government regulations governing land use, forests and plantation cultivation. It ultimately came to a pass in 2007, and the Government sprung into action to demolish illegal resort constructions to restore the beauty of the town.

Irrespective of all this, tourism has flourished over the years in Munnar and important tourist activities include boating (in the reservoirs of the many dams), trekking, parasailing, hot air ballooning and camping and wild life safaris in the jungles and sanctuary. The presence of all these activities and more has ultimately led to Munnar becoming a choice destination for foreign as well as domestic tourists. One can also see people from nearby districts in Kerala and Tamil Nadu thronging the town during weekends.

Munnar was the starting point of Kundala Valley Railway functional between 1890 to 1924. 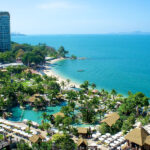 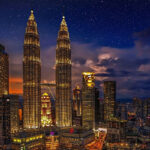 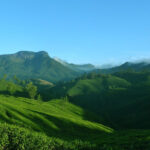